My body and mind were very tired. I arrived at Sydney and stayed at the house of my father's friend.

I cannot write well as my right hand is set in plaster. After I went about 40 kilometres north of Newcastle, I was involved in an accident with a truck. It felt like I was dragged for a long time, and I thought I would die at that time . I thought I hated going back the way I came when I was looking out from the ambulance. I do not want to even look at a bike now.

Fight in good spirits, even when hurt!
Good luck


Mr. OXXXka (X is a hidden letter) works for a major Japanese automobile company and has been posted overseas. Mr. OXXXka had been active by selling four-wheel-drive vehicles in the African continent in the days of yore. I think he was just a little older than 40-year-old-ME now as he is a classmate of my father. "To drive a four-wheel drive around a desert, I had to put in a spare gas tank," he told the story of Africa to 20-year-old-me just as 40-year-old-I tell my old stories to youngsters. Then, Mr. OXXXka listened to my glistening story of round Australia by bicycle. Because I was not his child, or he had harder experiences in African, he gave me support without opposing my travel plans. The reason does not matter. When a heart is likely to break, it is good to be pushed from behind even without a reason like "alright, it is not a big deal."

I say it is OK to fail. You should grab something if you do not give up, get up again, and go forward. Still, when I had a big setback like this, it is hard to move forward. When a guy says "human is weak," 20-year-old-i had said "it is not. Ourselves are weak, but not a human." In the common room of my airplane washing job, I wrote down such words in a pocket size white notebook that I looked at often. It was a notebook given to me by my father.

My back was grazed too much so I could not sleep on my back, right hand was set in plaster, and I no longer had a bicycle. This time, my weakness seemed to come out. But, while I was talking to Mr. OXXXka, I started thinking everything seemed like not a big deal. I think I was being pushed at my back.

By the way, this is the diary that I wrote after the accident on April 5 with my right hand, which was set in plaster. Usually my handwriting is quite bad, but because my right hand had no freedom, it was as good as that of elementary school students.

Anyway, my motivation came out.

Mr. OXXXka showed me Japanese television programs. He also let me call my parents. I called my parents and asked them to send me an English textbook from my high school days - "English syntax II" - and an English conversation book. I realised that I need to study English at heart because of the accident. It is simple. I must learn it even if it costs me my life. Otherwise, I might die the next time.

I have to buy a new bicycle. I have to return to the place of the accident to take the rest of my luggage. I need to recover from the injury. Anyway, it is good if I do this one by one. The self-development website teaches "warp navigation of life" to go to a destination efficiently. However, when young, we cannot do "warp navigation." Rather than that, it's best if we proceed with what we can do one at a time diligently.

The next day, I moved to cheaper accommodation in the back of a striptease club at Kings Cross. It was described as a backpackers hostel, but it was a room in an old house that had three bunk beds and nothing else. It had a common toilet like Sanrakuso. There is a shower, so perhaps it is better than Sanrakuso. It is a place like a junkie kicked the door to enter. Anyway, I began preparing to go round Australia by bicycle again. Meanwhile, I went sightseeing a bit and talked about our home countries with foreigners staying in this room. And I have noticed that the world is huge. Going round Australia cannot be the goal of my life. Once this is done, a new goal will come out. So it is good if I enjoy the process one by one.

I go to the Royal Easter Show with Fred, a German sleeping in the bed above, today. Fred seems to have liked a girls' fashion show as he was looking at the same show twice. The things men think are the same in any country. I liked the axe-cutting competition, but this would not happen in Japan as it is too dangerous.

It had been a long time since I'd had a day like today that pissed me off. It was because the insurance of a truck driver cannot be used. I remembered the game that Yuri Ebihara (Yuri Arbachakov) has done in Thailand suddenly. Is it a hometown rule ....

But, I get to visit to the home of Jenny (University of New South Wales) on Thursday of next week.

I went to the police station in Raymond Terrace to take the bike today. I will surely not forget the place name here. Mr. Huang gave me some delicious bread as he said goodbye.

I went to a Sydney bike shop with the (old) bicycle. New bike looks like a mountain bike mixed with a touring type. As the color is purple, it looks like its part of a motorcycle gang. The mood is Easy Rider.

I do nothing really today. It was a bad day as I shouted to my parents on the phone.

Dependence should be thrown away, but not to be picked up .

I have to speak English. Because I don't, I lost several ten thousand yen today. It is about Insurance. Martin on the bed on the right above described traffic and temperature in the United Kingdom. He said that these pictures are the arts (there are drawings on this page).

Today, I got a bike at last. I had the third discussion with the clerk with a bald head, but we seemed to be irritated with each other. I have to be able to speak English.

A few days later, keeping the plaster with me, I went to a police station near the accident site to pick up my luggage and bicycle. 20-year-old-i wrote that I would not forget the place name of Raymond Terrace, but I had completely forgotten it. Though I remembered it after I read it. I am grateful to Mr. Huang. In this journey, I was indebted to many people, including him.

Because my English was not good, I did not know what that reason, but I could not claim on the insurance of the truck driver. I decided to use the overseas travel insurance subscribed in Japan. The insurance my father chose, and I paid, costs around 100,000 yen and included a 10 million death benefit. Therefore, there was one quarrel with my father prior to my departure, but I got my money's worth from this case at this time. Dad, thank you!

The bright red Japanese bike, which I was not able to ride again, was brought to a shop to tradeing in on a new bicycle. A bike shop in Sydney said it was useless. Some parts that can be still used such as pedals, etc. were transplanted onto the new bike I bought. The new bike was a purple 27 inch cross bike from Giant. I chose it with "a bicycle shop in town" of Sydney at this time. I said "The mood is Easy Rider" so I was very motivated. I had not had a thought of withdrawing since I crossed the Rubicon river at Sanrakuso. This is "20-year-old-me" for better or worse. I was a nuisance to the clerk who had a bald head, but my enthusiasm to go round Australia by bicycle was understood by him, so that he gave me a bright red cycle jersey.

And I remove the plaster cast on April 16. 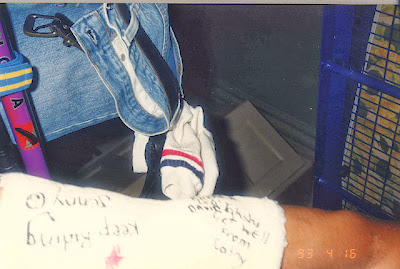 The cast had been written on by people I had met in the last 10 days.

This is even more-so now.

By this time, because my arm had no pain at all, I did not think I had a broken arm. The doctor said, "You must not remove the plaster for two weeks," but I cannot wait anymore. I went to a hospital and I removed it.

The new bike is now in my hand. My right arm is now free. The wounds on myhip and back have not healed completely, but this is not a reason to keep me tethered to a small room in Sydney.

The cast was taken from my right hand today, so I finally became free. Starting time is determined only by how I feel. As I finished eating the disgusting sausage, I decide to depart tomorrow or the day after tomorrow.

I decided to start tomorrow morning. It is a farewell to this room that I have lived for nearly 2 weeks.

Now, it is a time I start once again.