[E:2] Prologue 2: Lessons on "labor" and "social life" ~Squeezing the expenses of my bicycle trip~ 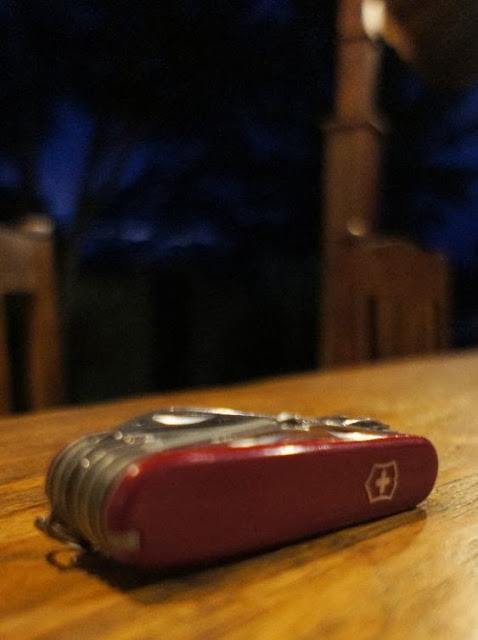 Before moving to a story in Australia, please let me write another prologue a little more. This time, it is the story of squeezing my travel budgets, but it is really lessons learnt on "labor" and "social life" and the story of this knife.

Last time, I wrote a story taking the consent of my parents, but my preparation had already been underway by that time. First, I started saving my travel funds at the beginning of my preparation.

To start the trip in April, I had to save about 1.5 million yen (i.e. 15,000 U.S. dollars) in six months. I had a passion, but because I had no experience and skill, to save 1.5 million yen in the six months, a hard physical labor is only my choice. A part-time work at a liquor store would not let me save 1.5 million yen in the six months. I was looking for a night-time work that gives me more than 10,000 yen a day. I found a vacancy of "aircraft body wash at Haneda (Tokyo) Airport". Sanrakuso of wooden mortar where I lived is close to Haneda Airport and the job gives me more than 10,000 yen as daily wage, and I can use the bath for free. It satisfied the needs of me who had no money and no bath. I applied the job from a public telephone immediately. They said "come here from the next day or today," so I started making travel funds.


The working hour starts after dinner time and ends around dawn. I went to Haneda Airport by a motorcycle.  I washed two airplanes in about 8 hours overnight with eight people. It was usually one small aircraft called B3 and one jumbo jet aircraft called B4. I think, if it came to wash two B4 aircrafts, the daily wage had gone up a little in the name of overtime. As an underling freshman I washed an aircraft from below with the mop of about 5 meters (visual estimation) which is made ​​of aluminum. I used kerosene when dirt was terrible. A mop for kerosene was shorter (still quite long), but it is very heavy because it was made of wood. Like the movement of fishing, I continued to swing a mop of these back and forth for a few hours.

During the work, I wore a rain jacket, a protective goggle, and a helmet. Water released from a pipe for firemen got befallen on me as a heavy rain from above. The work was as hard as I wanted to take off the rain jacket because of the heat even at late night in midwinter. Because it was such a work, a normal person quit within a few days.

Because I am clumsy, I did nothing but troubles to seniors and they got angry at me at first.  However, I did not take a day off nomatterwhat. I spent with other work and study during the day. I got very sleepy, but I put my efforts to come to Haneda Airport every night weekday and weekends. After finishing washing airplanes and taking a bath in the workplace, I rode the motorbike to a convenience store that offered "all-you-can-drink&eat freshly baked toast and coffee" to eat seven pieces of thick sliced toast at 150 yen (1.5 USD). Then, I went back to Sanraku-so.  I sleep as I fall for 2 to 3 hours. Sometimes, I wanted to go to the bathroom, I did not have an energy to go to the shared toilet so I went to bed (actually it was a futon on tatami). This has proven that a desire for sleep can be stronger than a desire for discharge. There were many mornings when I could not move/open my fingers. Mr. Hiromitsu Ochiai (one of my favorite Japanese baseball players) practiced baseball bat swings too much in his playing days and his hand could not open sometimes.  I think mine was similar to this. I forced open and close my fingers until I can move my hand, and I started my new day. It was my everyday life.

Each time I washed a single airplane, I've been telling myself "I'm going to Australia by getting on this." To 19-year-old-me, it was great to get a lot of money every week, but learned "amount I earn in manual labor without skills is limited," at that time. Even in a situation I worked day and night, I did not sleep more than three hours, and there was nearly no spending other than rent, it was difficult to save 250,000 yen (2,500 U.S. dollars) or more in one month. No one has more than 24 hours in a day. I realized at this time that I should spend my effort on studying to increase my long-term hourly rate. This is one of the major reasons why decided to go to a university after the Australia trip. In order to earn money to go to the University, I still had to be a driver of the long-haul truck, but during both New Zealand undergraduate and Oxford graduate days, I was focused on putting my effort thoroughly on study without much part-time work. Thanks to that, I can now earn more efficiently.

I return to the story of the cleaning airplane, Because of my believe in "late bloomer," no matter how much I got angry and felt tired, I went to wash airplanes every night. When I was in the elementary school, a fortune-teller came to my house. By him, I was told "You have many friends. You are a late bloomer."  Before I go any further, I have to act to believe this message. I make only mistakes at the beginning, but I do not give up. In the end, I will do anything better than anyone always. It was the same for the travel in Australia and even for study and research. Then, the plane wash was the same. I became recognized by seniors, and I was allowed to give an instruction to newcomers. I could talk a variety of stories in break time and could speak the planning of Australia trip.

And then, I hear a rumor about me "hell, he continues forever." From seniors, I seem to be called "Iron Man" in the behind. I do not know whether there really is such a record, but I did not have a day off for 48 days from the first attendance and that is a record. I was told it when I took a vacation for the first time. I took a day off, it is because I went to get an agreement about this trip from my parents. So, when I had a big presentation with a map of Australia which was connected by cellophane tape, my planning was well underway already.

The airplane cleaning job also gave me a valuable experience that I could meet those unusual. Businessman who collapsed 7 pubs; Middle-aged-man of long sideburns who was spending all his money into gambling and settled in our common room; Another middle-aged biker intend to travel by a motorcycle, but had been working there for three years; Knife nerd; University student coming to the job in order "to observe people at the bottom prior to new employment with a top company"; Another university student aspiring to be a teacher did not even know a country called Ivory Coast and said "because I am a student of XXX univesity, I am more correct than you"; Heir of Miyadaiku (carpenter who build temples and shrines) coming to kill his time; Man in his late 20s to come to a career change from security guard because he wanted to change himself and told "Do it even if it costs you your life" by me (I'm sorry); Good man "willing to move on the road of thorns" and coming to here with flow after failed university entrance exams.

They were tough at first, but were all good and were strange including me. I loved to talk at a break with them and it is also one of the reasons directed me to the Haneda Airport every night. There is another thing what I have learned here. It is more interesting not to select people hang out by career appearance and their looks. It was the time when I decided to "not discriminate against anyone" even if I become no matter how successful.

After all, there are unexpected expenditures, so I could not saved 1.5 million yen, but I was able to obtain enough funds to round Australia by bicycle. This is also thanks to everyone that I had worked together at Haneda Airport. To take this opportunity, please let me say thank you.

Victory Knox, the Swiss army knife, at the beginning of this post, you gave me at bon voyage is still with me.