[E:1] Prologue 1: "Trigger the project of finding myself" ~ How I decided to go round Australia by bicycle ~ 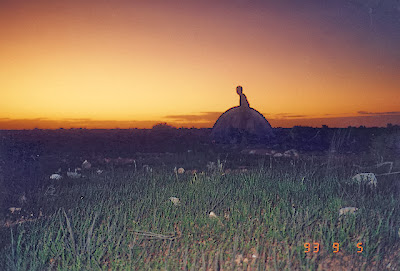 At first, I would like to write a story about the time before going to Australia for the bicycle trip as a prologue. This time, I wrote "the process how I decided to go round Australia by bicycle".

It’s 1992, and I am in Tokyo at the age of 19. I live on the second floor of Sanraku-so, four and a half tatami size (about the size of BMW Mini) room in a wooden mortar apartment. There is neither bath nor telephone, but it has a community toilet. There is a bay window, which I have called a loft. Friends say "Do not be optimistic!".

At that time, there were both good and bad things, but it is an age that I could not progress as I expected. As I do not want to remember, I am not talking about these days. So, please do not ask me about it ;-). It was the time I was interested in theater and film, and wanted to work in such a world. It is also the era I piled a sleeping bag and tent on my bike and traveled all over Japan.

Now, I may be taking an "easy-going" attitude, but my friends call me "the man is hotter than the Kondo match (a Japanese pop-ideal 30 years ago who was showing a passionate attitude)" in those days. My attitude came merely from "finding myself" as a youngster. Now, when I see younger people try to find themselves, I think that "it is not necessary to try to find as you are already here." However, I was also crazy about "A project finding myself", so it probably needs to have such a period when we are young.

I think that there are many themes of "finding myself" and mine was "how much I achieve my plan without compromising." I was a self-satisfying bastard, not working for a world peace, but instead I was challenging the limits of my abilities. The reason I was traveling all over Japan is because of my plans I made during my high school days: I decided "to travel round Japan by 20 years old, to travel round the Australia by 25, to go Africa north to south by 30." Of course, I enjoyed homeless journeys. I could not go to Okinawa, but I went around all of Japan by the age of 19 as planned.

I am often thinking like "What can I try next," while sitting on the bay window aka loft. Friends often come to stay at my 4.5-tatami size-apartment. I liked a song "the bridge of promise” by Motoharu Sano (another Japanese singer making songs youngsters like). One day, one of my friends bought the CD single, and we had a binge while playing the CD in an infinite repeat mode. Then, everyone get tired and is falling asleep. A refrain of the song "You up to now are not wrong! For you, I make the bridge of seven colors to cross the river" has been infinitely repeated in our heads. The next morning, "because I’m tired of this, I'll give you this CD," said the friend who bought the CD and left the CD in my room.

I think that I was humming "You up to now are not wrong!" Because I will have a legitimate employment, I was thinking "Maybe I go to India next" before going to be employed. There were many events that triggered my determination to go to Australia, but it is basically because of "project finding myself". I remember that I wrote "80% is not enough, so I will do 100%" for the short essay of the employment examination. My mother was saying, "80% is enough." Now I know she was right. However, because I was carrying out "project finding myself uncompromising", she did not convince me.

It is vague because such a thing happened 21 years ago, but perhaps when I was humming the song from Motoharu Sano at the so-called loft, I remembered three goals I had decided in my high school.

"After all, the next step should be Australia."


The next goal was decided quite suddenly. This is called "crossing the Rubicon": to make a decision at a level of commitment where I have no opportunity to change my intention. For me, I was "crossing the river by making the bridge of seven colors" by Motoharu Sano. Once I had decided, my series of actions came very quickly.

"How much money will I need?"

"A thing called a passport will be needed because it is not Japan."


I think there was a long to-do list in my notebook at the time. Since I had never gone abroad, I got my passport first. Because I initially thought I could go around Australia within six months, I got a six-month-visa. However, after some calculations I decided that six months was not enough, so I acquired a working-holiday visa that would allow me to stay there for one year. It was the era when there was no Internet, so I went to a library, copied the map of Australia, checked the climate, and I made ​​a travel plan. I was not sure what the road conditions are like, or even if there is a road. However, after considering climate and westerlies (winds), I decided to travel "counter-clockwise from Sydney".

Preliminary research is important. While going round Australia, I met a Japanese man who had just arrived in Perth under the working holiday scheme. I befriended him and I made him challenge himself to go round Australia. He was a good man who bought my camping equipment, but he did not listen to my advice, so he started to travel clockwise with a mountain bike (which was becoming fashionable at that time in Japan). Rumors, brought by the wind, told me that he gave up the trip and went back to Perth a few weeks later because of the westerlies. We feel guilty about counter-clockwise for some reason. But, because of my preliminary research, I could declare "counter-clockwise is justice."

The era of no Internet and no mobile phone is good. The amount of information is limited, but the amount of noise is also low. There is no being misled by the opinion of others by Twitter and mobile phones. And you can see the dream. I could not have expected the severity of the Australian Outback at all, as I found one picture about flowers in bloom all over a desert during my pre-investigation at the library. I did not know where to see that, but I could see the dream. "Really, can I see that!"

Now, even if I crossed over "the Rubicon with the bridge of seven colors" in the same way, 30 seconds later I will ask Master Google to decide the route from a Smartphone. I will decide the best starting time and location by browsing Weather.com. In the process, I will see thousands of pictures about Australia and I will read the attempts of many pioneers on the Internet. Then I will hear the opinions of everyone from Facebook, Twitter and by mobile phone, and may even have a chance to be introduced to an expert or two. There is no adventure there. I think you can check safety and equipment by mobile phone and the Internet, but it is becoming difficult to see a dream.

My intention was fixed, but I was minor and a youngster, and I thought I needed parental consent. Since there was no telephone in my 4.5-tatami size-apartment, from a public phone nearby I told my parents that I needed to have an important talk with them. With a copy of the map of Australia I went back to my parents' house. 19-year-old-i faced my parents in their drawing room. After opening the map of Australia joined with cellophane tape, I gave a big presentation. The purpose of the presentation was to prove how safe my plan was. If it were now, Twitter would advise me it is better to make the presentation to explain "how much going round Australia by bicycle would contribute to world peace and my future career", or at least "protection of the kangaroo", to get parental consent easier.

With this straightforward approach, complacent-bastard-I explained "Not to betray my dream of high school days, this trip is important! This trip is very safe. I go with my own money and I will take out insurance. I will not bother you. So, please let me go this trip." They opposed at first, but I won’t take no for a response if I commit a thing, so I got an OK at the end on the condition that "I visit a friend of my father living in Sydney, and from time to time I contact them.".

While I thought it was good to convince my parents, I worried suddenly. There is still this feeling somewhere.

"I can no longer turn back now."